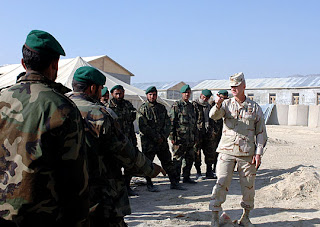 More than seven years into the conflict in Afghanistan, the U.S. military and its allies are finally realizing that a change needs to be made in protecting the porous 1,200 mile long border between Pakistan and Afghanistan. According to this article in Stars and Stripes, the U.S. military is instituting major changes in their collaboration with the Afghani border patrol forces.
The U.S. troop increase in Afghanistan, which has begun late last year, is of course a response to the increasing violence in the region on both sides of the border and the greater Afghanistan in general.  After the beginning of the invasion of Western troops in the country in late 2001, the Taliban was officially dethroned and "defeated."  In reality, it only retreated into more rural areas and kept a low profile. Currently, insurgent activity is increasing, which seems to be carried out by a mixture of Taliban and other militant tribal groups.
The U.S. has repeatedly used unmanned drones to target insurgent hideouts on both the Afghan and Pakistani side of the border, accepting a certain amount of civilian casualties, or euphemistically speaking, collateral damage.  And this has not won them the hearts and minds of the people.  Quite the opposite is happening and it seems as if these attacks were actually serving to spark further civil unrest in an already devastated country.
Like in Iraq before, the U.S. and its allies have been trying the approach of "Afghanistanization," trying to prepare Afghanis to exert their own authority when the time comes for foreign troops to leave.  This serves to reinforce trust and confidence in  and identification of the people with their security forces and to institute a certain amount of independence from Western troop presence.  Not only have the ISAF forces been training Afghani police and military units in the past, but now are working on border security, a quite crucial issue. In the past, the allies have used small teams of advisors to train local military and police forces, but the U.S. is now expanding these efforts. U.S. battalions are now increasingly being dispatched to work with Afghan border security battalions.  A border police basic training course is being instituted, which equips its students with weapons and gear and pays them. The U.S. is also working on constructing 165 new outposts on the border, which will greatly increase security capabilities.
However, many security forces recruits still fail drug tests and often don't come back after they have been issued their weapons and uniforms and receive their first pay.  This seems to be the product of a deeper rooted trait of Afghan culture. The primary allegiance for most Afghans has been mainly to their tribal heritage.  A lack of allegiance to the nation state itself has characterized the country's history, which is understandable considering the top-down creation of the borders of the state of Afghanistan by the British, neglecting any respect of tribal areas.
Western troops need to increase their sensitivity for the cultural implications of dealing with Afghans, if they want reliable security forces.  But they also need to be able to rely on the Afghan central government led by Karzai for cooperation.  In recent months, Karzai has repeatedly condemned U.S. drone attacks on insurgent hideouts because of civilian casualties and today large demonstrations took place against U.S. attacks.  But Karzai needs the U.S. and without coalition troops, he probably would not be in power too long before being overrun by Taliban forces again. The coalition troops need more time to reinforce their efforts of creating reliable security forces and winning the hearts and minds of the average Afghans, who also have to learn to begin trusting the central government.
Posted by Thomas Hobbes at 7:32 PM

I'm debating on changing my handle to Aramis.